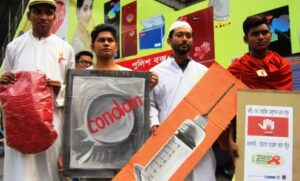 According to the GAP Report from UNAIDS, 1.5 million people worldwide died of AIDS-related illnesses in 2013. By the end of 2013, an estimated 35 million people around the world were living with HIV. Further, UNAIDS also reported that Bangladesh has 9500 HIV infected people living and adults aged 15 to 49 prevalence rate is -0.1%. Based on this statistics, this year?s World AIDS Day theme is fixed as ??Zero New HIV Infections, Zero Discrimination and Zero AIDS-related deaths?. Considering this epidemic and rate of affected young people, SERAC-Bangladesh together with Global Youth Coalition on HIV/AIDS (GYCA), Orunodoyer Torun Dall, Ek Ronga Ek Ghuri organized a demonstration in front of the National Press Club in the capital on Monday.

?SERAC-Bangladesh?s Executive Director and GYCA Advisor in Bangladesh S M Shaikat said, though the rate of HIV prevalence is lower than many other countries, it is still can not be ignored that the key young populations affected by HIV/AIDS include transgender, men having sex with men, sex workers and injecting drug users remain at high risk. Further, it is still a highly stigma situation for women and girls who are living with HIV/AIDS in the country. Again, the taboos, shame and fear along with lack of information and awareness among young people can widely challenge the health interventions.

Link Up project Focal Point from GYCA, Rokon Rawnak said, the HIV infected people are already facing a large stigma from both families and social levels. They have to face discrimination at every stage in their life. This situation must be eradicated, otherwise the overall health situation would fall at risk.

Shahidul Islam Babu, President of Orunodoyer Torun Dall said, those who engage into unsafe sex, take drug through injections and syringes are at the top of risky behavior people affected by HIV and the rate of Bangladeshi youth on this is increasing day by day. This situation must be prevented with an integrated and discrimination free intervention.