The international political response to climate change began at the Rio Earth Summit in 1992, where the ?Rio Convention? included the adoption of the UN Framework on Climate Change (UNFCCC). This convention set out a framework for action aimed at stabilising atmospheric concentrations of greenhouse gases (GHGs) to avoid ?dangerous anthropogenic interference with the climate system.? The UNFCCC which entered into force on 21 March 1994, now has a near-universal membership of 195 parties.

The main objective of the annual Conference of Parties (COP) is to review the Convention?s implementation. The first COP took place in Berlin in 1995 and significant meetings since then have included COP3 where the Kyoto Protocol was adopted, COP11 where the Montreal Action Plan was produced, COP15 in Copenhagen where an agreement to success Kyoto Protocol was unfortunately not realised and COP17 in Durban where the Green Climate Fund was created.

In 2015 COP21 being held in Paris now, also known as the 2015 Paris Climate Conference, will, for the first time in over 20 years of UN negotiations, aim to achieve a legally binding and universal agreement on climate, with the aim of keeping global warming below 2?C.

The world leaders have gathered together in Paris to agree a new climate agreement with the potential to secure a safer planet. The decisions made at these this gathering will help shape the fate of the next generation and many more to come. So it?s vital that these plans are as ambitious as possible. 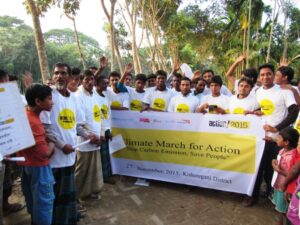 To make the world hear what new generation and the inhabitants of this world want and to step up to the challenge and make the right decisions, SERAC-Bangladesh in partnership with the Action/2015 organized rallies, marches and human chains of more than 25000 people from all age groups in Dhaka, Mymensingh, and Kishoreganj in Bangladesh during November 28-29 to mark global demands of-