Do Not Delay in Pictorial Warning on Tobacco Products 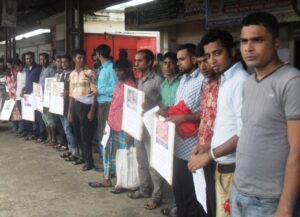 Multinational tobacco companies that operate in Bangladesh enjoy the kind of packaging advertisement which they never have in any developed countries. They have to follow plain packaging or pictorial warning signs on same brands which they do not do in Bangladesh. They take advantage of lower literacy rate of people in Bangladesh than in a developed country. The current law says at least 50% pictorial health warning must be put on tobacco products, which would allow smokers understand health risks and quit as well as a discouragement for non-smokers. There are a number of people who can not read or understand the messages given by tobacco companies, so the literal warning is not working effectively. Again, it is said that a picture is 1000 times powerful than words. Hence a pictorial warning on major tobacco products like bidi, cigarettes, jarda, gul etc. is a demand of time now. Raising these issues, SERAC-Bangladesh organized a human chain at the railway station in Mymensingh on Thursday, July 16. Activists and general public demanded urgent implementation of legal provisions to ensure pictorial warning at least by 50% of packets and prevent interference of tobacco industry to create barriers on the process. 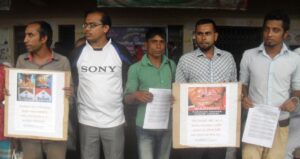 Activist also said, each year Bangladesh experiences 1.2 million people affected by tobacco related diseases. They also quoted WHO source as 57 thousand people die each year and 382000 people become paralyzed for the consumption. So implementing pictorial warning will allow smokers to learn the harmfulness of tobacco consumption and beware before they get affected.