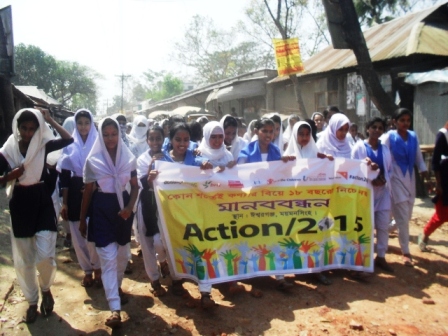 Do Not Lower the Marriage Age for Girls: Action/2015 Human Chain in Ishwarganj 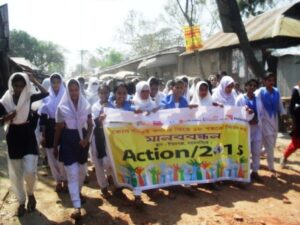 UNICEF reports in 2014 that 2 out of 3 girl child face marriage before 18, and UNWOMEN reports that such violence cause a huge economic loss, as it makes a loss of 1,939 crore taka a year, which is 2.12 percent of the gross domestic production of the country economy. Considering this situation, to create mass awareness and generate pressure on policy makers, the Action/2015 Bangladesh coalition organized a rally and human chain and youth gathering on Tuesday at 12.30 PM in Ishwarganj. To note, Action/2015 is a global campaign being led in Bangladesh by World Vision Bangladesh, Help Age International, SERAC-Bangladesh, Save the Children, Brit and Steps Towards Development. 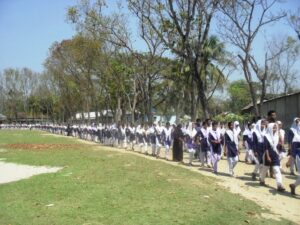 The major obstacles faced by women and girls in their way of development in Bangladesh are marked as sexual harassment, child marriage and dowry, and this event was designed to engage youth and girls and aware communities to prevent these social evils. On the eve of the human chain, SERAC-Bangladesh Md. Oli Ahad shared the theme and mass engagement issues through Action/2015 with the viewers. He informed about how an individual and small groups can be influential on global leaders to take concrete decisions for a sustainable development, non-violent, poverty free, equality based world for children, women, youth, elderly and all by taking part in this campaign.

During the human chain, speakers are said- Women and girls are the major victims of gender based violence. While the whole world is vocal against violence against women and girls, we encounter a number of incidents everyday that challenge the overall women development policies and their effectiveness.

They also said this statistics is shame for all of us. We never expect anymore national and international development to underestimate women and girl child. If we think we never want to see this statistics anymore we should change our mentality and behavior. Stop violence against women and girl child they demanded on national and international leaders.