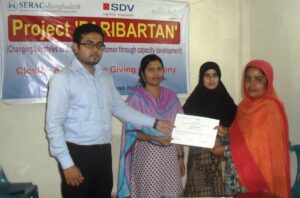 Most women in urban areas of Bangladesh fail to reach direct earning sources due to their engagement in household works. This results into narrowing job markets for women. It badly affects those who belong to poor families. Because of the no in-cash financial contributions into families, they become deprived of taking any major decision that affects their lifestyles and well-being. To overcome this, SERAC-Bangladesh provided handicrafts training to 50 slum living and poor women in Mymensingh. The unique feature of this initiative was to enable women to work and earn even sitting inside their houses, which received grant from the UN-HABITAT Youth Fund in 2010 and later in 2013 it received the Earth Talent award from Bollore Group. This 2013 award grant project was a reinvestment of the UN-HABITAT project and renamed as Paribartan (Changing lifestyles of disadvantaged women through capacity development). Paribartan project with the support for Bollore Group and its associate organization SDV Bangladesh, provided this training for free and the beneficiaries learned to make 15 items and products made of beads, cloths, paper and cement.

Upon closing of the project cycle, the beneficiaries received course completion certificates from SERAC-Bangladesh?s Executive Director S M Shaikat on Saturday morning at a program hosted in SERAC hall room in Mymensingh. Others including Director (Programs) of SERAC & technical advisor of Paribartan project Shahina Yasmin, Program manager Oli Ahad, Program Officer Fatema Khatun, and project officer Barkatullah Bhuiyan were also present at the occasion. Certified beneficiaries expressed their deepest gratitude and raised different issues regarding the project. At closing, the Director-programs Shahina Yasmin asserted further support towards these beneficiaries in receiving trade licenses and soft loans from other organizations in advancing their entrepreneurship.