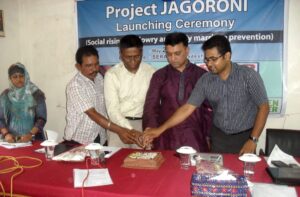 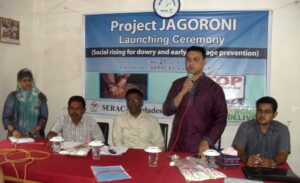 The two major reasons behind violence against women and children in Bangladesh refer to dowry and child marriage. Everyday we see news of victimization of women and children both in urban and rural areas as these social diseases are acute now. A report by Ain o Salis Kendea mentions 265 cases of violence against women happened in 2013; among which 128 women died after physical torture, with only 111 cases filed against perpetrators in those situations. Importantly, Mymensigh district is the top in dowry incidents as reported by the law minister Anisul Haque in February, 2014. In addition, another report by UNICEF mentioned that about 47 percent adolescent girls fail to reach secondary level education of which most belong to the early marriage situations. These scenarios pulling the country back to a future of backward and uneducated population.

Keeping these in response, SERAC-Bangladesh with the support from a leading women?s rights organization, Women Deliver started a project named ?Social rising for dowry and early marriage prevention, in short ?Jagoroni?. The project was launched on Wednesday, May 21 at SERAC-Bangladesh hall room in Mymensingh cutting a cake by the Mayor of Mymensingh Md. Ekramul Haque Titu, SERAC-Bangladesh?s Executive Director S M Shaikat, Upazilla Family Planning Officer Kazi Mahfuzul Karim and the young volunteers of Jagoroni.

?Mayor Ekramul Haque said, ?This noble initiative can bring a tremendous change in creating protection of women and children in Mymensigh. Implementation of this endeavor by young people can eradicate dowry and stop child marriage which will impact in the growth of the country with education, health and knowledge. I acknowledge that this Jagoroni is one of the top 10 global solutions and hence the winner among those which is a pride for us and I believe that young people can bring a positive social change as a new horizon though this initiative. Further I shall take step to make my city dowry and child marriage free.

?One of the Women Deliver nominated 100 global young leaders & SERAC-Bangladesh?s Executive Director S M Shaikat remarked, ?Dowry and early marriage bars health, education and overall development of women and children. Despite having laws and justice system a number of incidents go unnoticed due to lack of information, communication and proper initiatives which triggers more such stories in the next. This project will target those gaps and prevent dowry and early marriage with social rising.

Upazilla Family Planning Officer Kazi Mahfuzul Karim said, ?Child marriage is a major obstacle to women?s and adolescents reproductive health. Bangladesh has earned the success in maternal death prevention but child marriage taboo will risk this success if we fail to prevent. He shared his expectation to see this prevention measure by young volunteers.