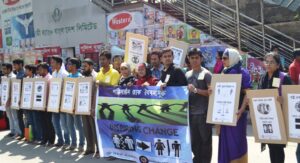 Where almost half of the populations are women in Bangladesh, we must move forward hand in hand with women to build a resourceful nation. It is impossible to establish a discrimination free society unless we stop violence against women, infringement of rights and legging women behind. We could become modern from outside but couldn’t be free from conservation of attitudes towards women. ?Public transports reserve 9 sits for women but actually it includes children and persons with disabilities, so women get only 3 sits! This has not improved the honor of women; rather it subjected them to be targeted of criticisms as they are not allowed to ride buses if those reserved sits were taken.

Another discrimination happens in public toilet usage in Dhaka, a male has to pay 2/3 Taka and a female has to pay 5 Taka per use. Those who have financial ability, they can go in a shopping mall, but no one thinks for those who struggle for this small amount of money, Taka 5. Let?s say about a waste picker female child. She earns no more than 30-35 Taka a day, while if she has to pay 5 Taka each time for toilet use, can we count what percentage of her earning is spent after this basic need? Upholding these types of unchecked discrimination against women, SERAC-Bangladesh, Justice for Bangladesh and Oronudoyer Torun Dal organized a human chain in front of Jatiya Press Club in Dhaka on International Women?s Day.

This exceptional human chain was attended mostly by men; about this strategy, Women Deliver nominated global young leader for Bangladesh S M Shaikat said, while most of the allegations about violence and discriminations against women are arrowed towards men, it becomes the burden on men to come forward to change this practice. Let us expect that tomorrow?s media get no news about violence and discrimination against women, so there will be no such incident today in the country; and men should be the frontiers to bring this change, he added.

Justice for Bangladesh?s Program Coordinator Syed Mazarul Islam said, men do not lose their power if women are given their rightful honor. It is true that women?s employment has been increased in the country but they are still far behind in making independent decisions. This discrimination has to be eliminated with mutual honor and cooperation.

SERAC-Bangladesh?s Program Manager Manjuda Akter said, women face negative criticisms if they claim equal rights, even face physical ability in comparison to men. So, attitudes and outlook must be changed to change the society.

Muncefa Tripti of Jagannath University said, discriminations are easy to find. A woman has to think about her security before taking any decision, which a man does not have to do always. Think if anyone looks negatively at your mother, sister, wife, or daughter as they are watching an alien, how would you like? If you would have felt bad, why do you look over to others?? The change process has began, and we must fuel it to move quicker.

Orunodoyer Torun Dal President Shahidul Islam Babu said, discrimination against women is visible in every sphere from individual to the state. Male-female partnership is a must to ensure any equality.