Health falls when age grows and at old age people must have access to nutritive, safe food, pure drinking water, and pollution free environment. These health and well-being issues become acute when they are allied by social discrimination and undervaluation. Focusing these issues, with the concept of `Generation Bridging? between young and older people, SERAC-Bangladesh, HelpAge International, and Prerona have joined organized a view exchange meeting at SERAC-Bangladesh hall room in Mymensingh on Sunday, April 12. 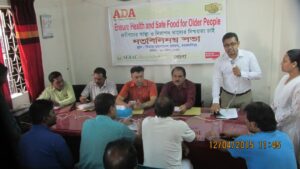 The meeting was moderated by SERAC-Bangladesh?s program officer Fatema Khatun Mousomi while the Mayor of Mymensingh Municipality Md. Ekramul Haque Titu was present as the chief guest. Speakers urged that in many countries like India, USA, Philippines introduced senior citizens card by their local government organizations and there is no such facility in Bangladesh. 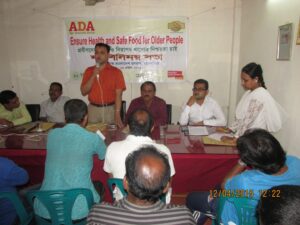 The Mayor explained, primarily this card will open priority doors at his municipality desks and will be followed by other collaborations soon.

SERAC-Bangladesh?s Executive Director S M Shaikat termed this announcement as a tremendous future investment for those living young age now. He also said, this will be an example for other local government entities in the country.