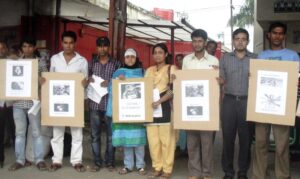 A report by the World Health Organization states, every year 57000 people die in Bangladesh as a result of tobacco related diseases and it is also reported that about 1.2 million people are affected directly for 8 major tobacco related killer diseases. Another research revealed that about 11 thousand crore Taka is spent as a loss of revenue after treatment, paralysis and unwanted deaths every year.

Considering the obligations under Articles 11 and 18(1) of Bangladesh Constitution and the negative impacts of tobacco on environment, economy and public health, Bangladesh government has a duty to control tobacco. Therefore a stringent application of tobacco control law is also a must. However this 2013 amended tobacco control Act is not being properly implemented due to the absence of tobacco control rules. Public health is threatened as a result. Speakers and tobacco control activists spoke these at a leaflet campaign pledging urgent passing of the rules at Mymensingh Railway Station in the afternoon on Monday.

At his remarks SERAC-Bangladesh Executive Director S M Shaikat said, the delay in passing the rules indirectly allowed the tobacco industry to continue their illegal tactics against people?s health, and risking health safety as well. Shaikat urged the government to pass the tobacco control rules immediately.

Program Manager of SERAC-Bangladesh, Manjuda Akter said, the amended tobacco control law has a unique feature obliging the industry to put pictorial warnings on tobacco packets. However the absence of rules to implement has put it in dark as to which pictures and colors will be used on that.