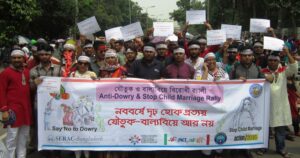 Bangladesh Mahila Parishad on its 2014 report quoted 236 killing and 195 domestic torture cases on dowry. Apart from this, 16 women were killed in January and 16 in February in this current year! On the other side, the UNICEF reported in 2014 that 2 out of 3 girl child face marriage before they are 18 in Bangladesh. The social practice in the country is often responsible for child marriage as the younger girls pays lesser dowry. 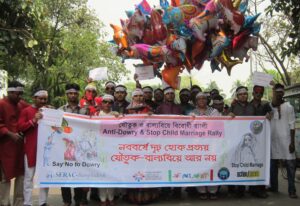 Although due to lack of social awareness, motivation such cases make the overall human rights situation vulnerable gradually. Again, strictness in application of laws is yet to be seen as a reality. So keeping these issues in check, SERAC-Bangladesh in collaboration with Ek Ronga Ek Ghuri, Action/2015 Bangladesh coalition, Child Rights Advocacy Coalition-Bangladesh, and Eastern University Social Welfare Club hosted a rally in front of Dhaka University Teacher Student?s Center (TSC) on Bengali New Year?s Morning at 10.30 AM.

The rally moved round through Shahbagh and ended at Dhaka University TSC. The organization leaders urged to increase punishment on dowry cases and called for awareness through family level education. They also strongly demanded revision of government?s proposal to lower marriage age for girls to 16. They urged the government to keep the age at 18 and make the child marriage prevention law stronger.