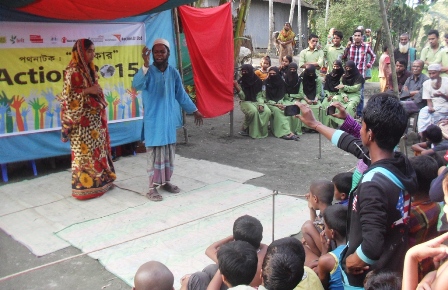 Street Drama to Prevent Violence against Women and Children: Action/2015 in Gaforgaon 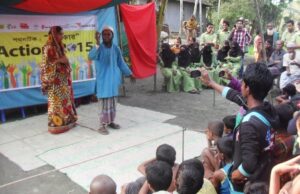 Action 2015 is a global campaign to mobilize mass people on their rights and demands for upcoming sustainable development goals. To organize country level campaigns six development and advocacy organizations including World Vision Bangladesh, Help Age International, SERAC-Bangladesh, Save the Children, BRIT and Steps towards Development have jointly formed the Action/2015 Bangladesh Coalition. The Coalition members are working together to mobilize people across the country. Action/2015 is calling on the public to join them in their calls to ensure world leaders commit to a better world for Children, Youth, Women and Older people.?As a part of its mass engagement activities, on Wednesday, the Coalition hosted a street drama titled `Odhikar? on prevention of gender based violence against women and children, in Rouha Moddhopara of Gororgoan Upazilla in Mymensingh.

The drama, which was enjoyed by a huge gathering of women, children and elderly, was specially designed on the prevention of major causes of gender based violence like eve teasing, child marriage, and dowry and the co-relations among these. Prior to that, on behalf of the coalition, SERAC-Bangladesh?s Director (Programs) Shahina Yasmin shared the theme and mass engagement issues through Action/2015 with the viewers. He informed about how an individual and small groups can be influential on global leaders to take concrete decisions for a sustainable development, non-violent, poverty free, equality based world for children, women, youth, elderly and all by taking part in this campaign. The gathering was then mobilized to sign in the Action/2015 banner for solidarity and they demanded world leaders to act on their promises to stop gender based violence all over the world.

Others including Fatema Khatun Mousomi, Program Officer of SERAC-Bangladesh and Project Officer Barkat Ullah Bhuyan represented the Action/2015 coalition there too. Local honorable persons are also present there. Local organizers including Sujon Mia, leader of Goforgoan Jagori group, a voluntary watchdog group by SERAC working in the Upazilla and its members were also present at the occasion.